Medial tibial stress syndrome refers to pain along or just behind the tibia. The cause is overexertion of the shinbone and its surrounding tissue. Tibial stress syndrome is commonly reported in athletes who participate in sports requiring frequent abrupt starts and stops. Runners are also often affected. The pain is caused by overstraining the connective tissue between muscles and periosteum of the bone. This leads to an inflammatory reaction of the bony attachment which can also often cause muscle cells to stiffen, creating myofascial trigger points which may manifest as either local or radiating pain.

The use of focused shockwave applications has been reported in the literature and described as a useful complement to traditional therapies. 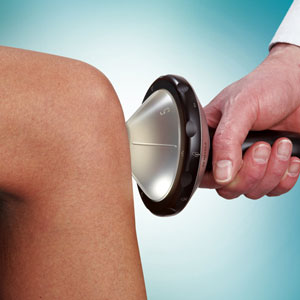